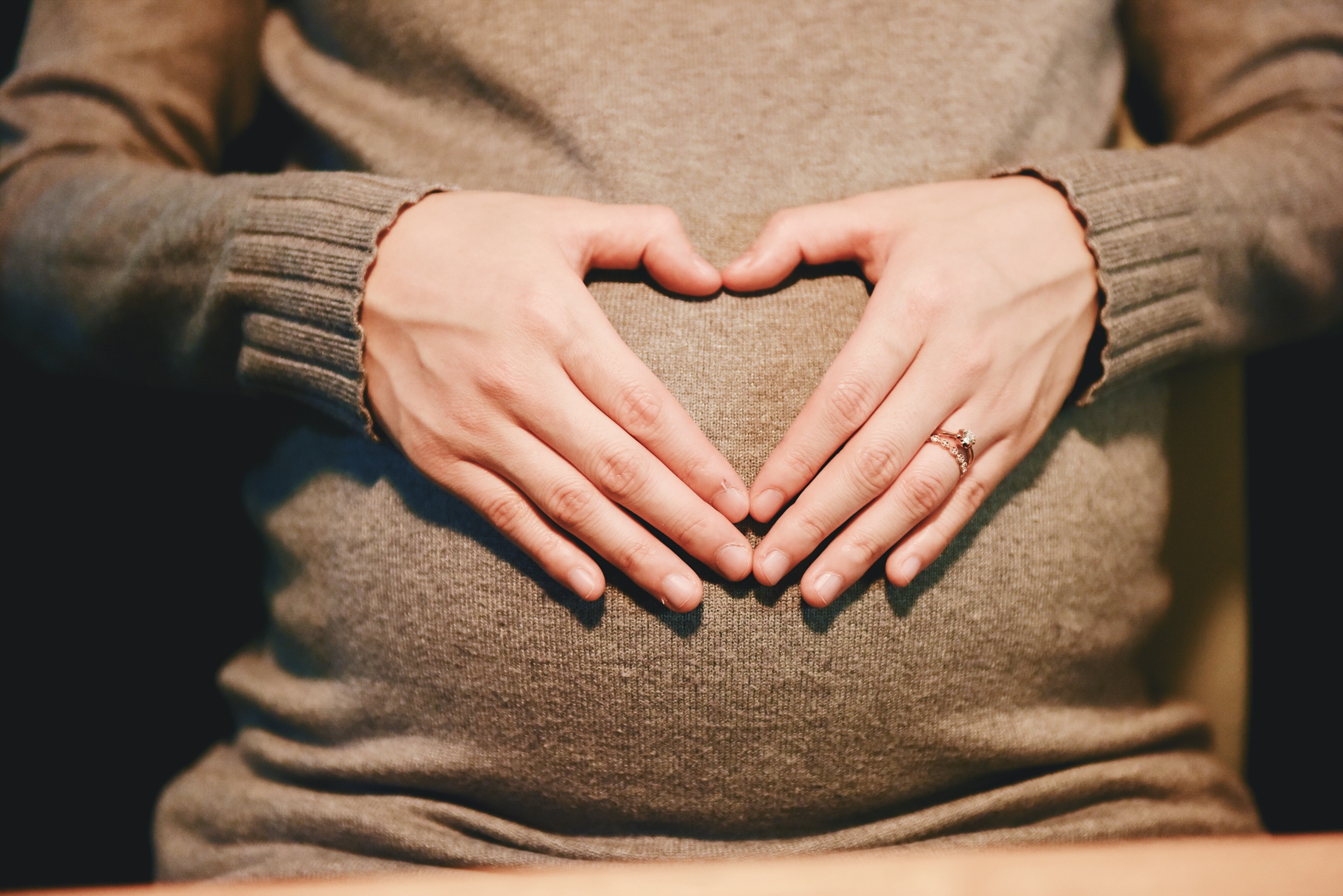 But when my son was born, I knew a few months into his life that the basically perfect pregnancy I had meant I was in for it with this little one! He did not sleep through the night until he was 14 months old. And I was basically a zombie for that entire time.

I should’ve known my time was coming while I frolicked through the flowers with not a pregnancy symptom in the world. Boy, was I truly in for a change!

Because I didn’t have any of the typical early pregnancy signs and symptoms, I got together with some other mamas who elected to share their own experiences with me! Take a read through some of these hilarious and unique pregnancy symptoms and see if you can relate to any of them.

Some moms can tell they are pregnant based on the way the twins are feeling:

Mackenzie Peter, heymackenziepeter.as.me: “My boobs literally felt like they were on fire 😂 and I was so tired!”

Mallory Herrera, mamaonparade.com: “For me, I could just tell based on my boobs. They grew and were much more painful than just normal period stuff.”

Caitlin Cancellieri Patoka, realmomrecs.com: “Around week 7 I felt some strange breast sensations and nausea, but mild.”

Sarah Martin, SarahRMartinLLC: “My breasts KILLED. Like it hurt to put a shirt on. It was awful. I started feeling that at about 8 weeks and I knew.”

Other moms find that the nausea sets in early and this is their first clue that something is amiss:

Abigail Paul, caterpillarink.com: “I experienced intense nausea, breast tenderness, and irritability. But it was the unrelenting nausea that prompted me to take the test!”

Liz Boothman, blueandhazel.com: “For all 3 the first sign of pregnancy was nausea, usually starting around 4 weeks. For kids number 2 and 3, my jeans felt too tight to comfortably wear around 5 weeks, far before I was ‘showing’! Exhaustion also accompanied all of the above the whole first trimester!”

Valerie Christy Baglivo, apeachinthequeencity.com: “We knew at 4 weeks. I had no technical signs or symptoms until week 6 when the nausea set in (all day hangover) and food aversions. I couldn’t drink water; it made the nausea worse. I had no idea meat smelled like it does until I became pregnant, and I could no longer handle raw meat. The only food I wanted was cereal or toast.”

Marie Jackson, organizedmarie.com: “Nausea immediately, like no other word to describe it.”

Hannah Spencer, abalancedmom.com: “With my first kiddo, it was just pure exhaustion that clued me in! I was taking like three naps a day and my body was just so tired. I didn’t have the energy to do anything. And the nausea was so bad, I could hardly eat at all. I thought it was just flu symptoms or something since it was in the fall. I finally took a test and did the math and realized I hadn’t had a period in 6 weeks. And for the second kiddo it was a late period. When I started tracking and actually paying attention to my period better, I realized it was regular always, even down to the time of day it starts. So when it didn’t, I knew something was up.”

Breanna Park, messybunsandmomjeans.com: “Waves of tiredness where I had to nap and flu like symptoms.”

Gessell Frisbee, thrivingmamablog.com: “I started “accidentally” taking naps. I’d sit down to rest and next thing be waking up two hours later having no idea what had happened. It felt like I had been drugged.”

Your body begins to change pretty quickly with pregnancy. Therefore, some pain and discomfort can lead you to believe you are pregnant:

Jennifer Lorah, theartofbetter.com: “I was having random sharp stabbing pains in my lower abdomen for about ten days and was convinced I had a tumor and was going to die.”

Olufunke Kolapo, mothersbooster.com: “My sense of smell was out of this world, then the back pain, had contraction almost all through. The weirdest was the Carpal Tunnel Syndrome. Had it till my baby was 6 months old. It was awful.”

Cravings can be so intense in pregnancy, you begin wondering if you should just line yourself up at a buffet to satisfy the craze:

Annette Schmidt, coffeechaosdryshampoo.com: “Protein craving, I ate nothing but eggs, spinach and tomatoes right before I found out. It was like I had to have it.”

Kelly Mahnensmith, simplyatwinmama: “Food cravings, last time it was avocados. Go figure I was having twins (again) and must have needed the healthy fats.”

Oftentimes, our emotions get the best of us on days when we aren’t even pregnant! Imagine the intense roller coaster ride of emotions when pregnancy hormones are in the works:

Brittany Holt Morgan, gracespokenhere.com: “I am the most unbearable human being until I realize I’m pregnant 😂 Baby #1 after infertility, I didn’t love my husband, everything he did was wrong, etc. It was SUCH a relief to know that I was just hormonal. He wasn’t actually the biggest jerk to roam the planet. Baby #2, I got irrationally angry (over a compliment of all things!), opened my mouth to give him what for, then abruptly started howling with laughter. Poor guy looked so confused for a second, until I choked out, ‘Oh man. Babe, I’m SO pregnant.'”

Cheree Fabian, homemademoma.com: “I cried a lot when my toddler threw tantrums, had a metallic taste in my mouth, was very tired and dizzy and got sick randomly. My emotions were all over the place and I couldn’t control them.”

Amy Ball Motroni, thepostpartumparty.com: “I was an emotional hot mess! We were on on a family trip to Tahoe and I was sobbing uncontrollably. People kept asking me what was wrong and I just kept saying “I really don’t know. Nothing is wrong.” I took a test that Monday and it came back positive.”😂

Some moms-to-be may experience the common early pregnancy signs and symptoms. However, pregnancy can throw you a curve ball and you may experience something unique when learning you are pregnant:

Katelynn Ansari, katelynnansari.com: “My 5 year old son randomly told me in the car, ‘Mom I think there’s a baby in your belly.’ Sure enough there was!”

Lisa Tanner, LisaTannerWriting.com: “I’m a mom of nine so far. My early pregnancy symptoms include skin changes (like a pesky pimple that always pops up in the first few weeks), exhaustion, and increased hunger.”

Mary Rohrer, mamarohrerspride.com: “My sense of smell increased, I was freezing, and hungry all the time.”

Suchot Sunday, thecuriousfrugal.com: “I had to pee more almost immediately.” 😂

Daphna Bar, atinytrip.com: “Before the nausea set in, it was a heightened sense of smell, and needing to eat much more frequently. But by 6 weeks the exhaustion and nausea were in full swing, so there wasn’t much time for speculating.”

Lisette Ruiz, mycrafty.space: “I knew instantly when I got heartburn.”

Other Early Pregnancy Signs and Symptoms

If you didn’t find enough unique, hilarious, or comparable early pregnancy signs and symptoms, here are other experiences:

What Were Your Early Pregnancy Signs and Symptoms?

Help add to this list of early pregnancy signs! What was your first clue that you were pregnant? How did you did you find out? Which of these moms could you most relate to? Share your experiences in the comments below!

Natural Birth vs. Epidural: My Medicated and Unmedicated Births

Preparing for Baby #2: How is it Different from Your First?