To the Moms Whose Baby Doesn’t Sleep Through the Night… 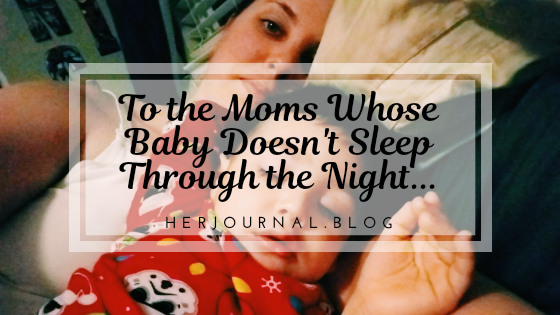 Shout out to the moms whose baby doesn’t sleep through the night!???? You’re the real MVP and this one is for you.????

Exhausted? Frustrated? Questioning existence? Yes, yes, and yes! I know the feeling and I sympathize for what you’re going through. This isn’t a post about how to get your child to sleep through the night because I’m still struggling with that. This is a post to show other parents out there that you’re not alone in this battle for sleep.????‍♀️

At my son’s nine month check up, his pediatrician asked me that dreadful question, “Is he sleeping through the night?” I hesitated before I embarrassingly answered, “No, he is not.” The pediatrician told me that by this time, my son should be going six to eight hours each night straight without eating and should therefore be sleeping during that time. Well, that definitely wasn’t happening.

After that appointment, I felt like I had failed as a mom. Why isn’t he sleeping through the night? What am I doing wrong? The pediatrician went over what we should be doing at night to get him to sleep and I wanted to ask her if she thought I wasn’t already trying my best to make this happen. I’m exhausted, why wouldn’t I already be doing all that I can to get some shuteye? It felt like I wasn’t doing enough.????

Each night when he wakes, I do all the essentials to ensure his needs are met: change his diaper, check to make sure his pjs aren’t wet or sticky or anything that they shouldn’t be, nurse him or offer him a bottle (depending on if he rejects one or the other), burp him, and then rock him. After all that, I’m tapped out! If he doesn’t go back to sleep after everything I just did for him then I have no clue where to go from there. Is he in pain? Is he teething? Is he going through a growth spurt? So many factors that could be going on, yet I have no idea how to fix it. Some nights he is up for an hour while other nights he’s up for three or four hours.????

I have gone through months of no sleep basically since he was born. He has given me one or two nights here and there where he slept six hours straight, but that’s it. I’ve Googled, searched on Pinterest, read countless articles on how to get him to sleep through the night and nothing has worked. I’ve tried essential oils, filling a glove with rice to make it feel like a weighted hand was on him so he felt like someone was near by, white noise, lullaby music, placing a wedge safely beneath his crib mattress to elevate him while sleeping, giving him a shirt that I had worn so he could have my scent with him, and praying hard to whomever would hear my pleas. I’ve tried the cry-it-out method, rocking him til just drowsy and then placing him in the crib to sleep, co-sleeping (for like a day because he moves around too much and keeps me awake regardless), and even resorted to actually sleeping inside the crib with him because I was desperate to get two hours of sleep. The worst part is that I’m a working mom who works 40 hours a week so the sleep that I don’t get just drags me down for work the next day. I’ve tried nursing him to sleep, giving him a bottle with an extra ounce or two, and giving him oatmeal before bed to see if that would sit heavier on his stomach. NOTHING has worked.

All those Pinterest ideas of other moms sharing how they got their baby to sleep through the night by two, three, or four months old are either liars or just really lucky. None of their methods worked for us. And believe me, I’ve tried everything short of hiring a sleep consultant (which I’m highly considering at this point). I’ve had family step in to try their methods and I’ve searched for advice on social media mommy group pages. My son has been on a bedtime routine since he was four months old where we bathe him in warm water at night and then lather him up in lavender lotion followed by a bedtime story. We’ve moved bedtime to an earlier time and moved it to a later time and were unsuccessful in all attempts. Some of his days are filled with activities while other days are filled with lounging around so I can’t even blame it on over or under stimulation.

My son is now over a year old and newsflash, he’s still not sleeping through the night! I don’t know who made up this rule that babies should be sleeping through that night at “X” amount of months old, but they surely haven’t met my son and should probably consider revising their research after they study him. His one year check-up appointment is coming up this week and I’m already dreading that question coming up again and being told what I’m doing wrong in this sleepless nights shenanigans.????????

So for those of you looking for answers to get your baby to sleep through the night so that you can finally drift off to dreamland, I really hope you find a method that works! If you’re like me and you’re at a loss for where to go from here, I’m right there with you dreading each night because I know what frustrations lay ahead for me. Don’t feel like a failure in this quest for sleep because you’re not! We just weren’t lucky enough to get great sleeping babies this time around. But we love our little regardless of the hard times! Just think, these days are numbered and soon we’ll be losing sleep over them when they get their license or go off to college!????

Did you have success with getting your baby to sleep through the night? Or are you struggling like me? I’d love to hear your thoughts in the comments below!